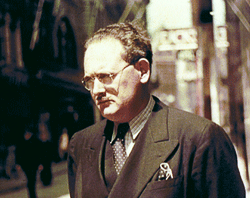 Lester Dent (1904-1959) has been called the Father of the modern Superhero, and with good reason. As the co-creator the immortal pulp scientist-adventurer Doc Savage, Dent laid the foundation for generations of superheroes to come. Superman owes much of his mythos, as well as his Fortress of Solitude, to the Man of Bronze. Batman borrowed Doc’s scientific training and utility belt. The format of the Doc Savage series was a major inspiration for Stan Lee and Jack Kirby’s long-running Marvel comic book, The Fantastic Four. The creators of landmark media heroes ranging from the Man from U.N.C.L.E. to Buckaroo Banzai have acknowledged the Doc Savage influence.

One can trace the roots of cultural icons as diverse as Star Trek’s Mr. Spock and The X-Men’s Beast back to the pages of Doc Savage Magazine. And James Bond’s world-famous gadgets owe more to the inventive genius of “Kenneth Robeson” than they do to Ian Fleming. Today, best-selling author Clive Cussler’s Dirk Pitt is the most modern reincarnation of the legendary Man of Bronze.

As for Lester Dent himself, he grew up in Missouri, Wyoming and Oklahoma, an only child in the final days of the old pioneer West. Pulp magazines were his main source of entertainment, and it was while working as a telegraph operator in 1928, that he decided to become an adventure writer.

Street & Smith published his first story in 1929. Doc Savage came along in 1933. One of the top pulps of its time, Doc Savage Magazine lasted until 1949.

Over a thirty year career, Lester Dent wrote for magazines ranging from The Shadow to The Saturday Evening Post, becoming one of the most popular and successful writers of the pulp era. Dent’s other characters include Genius Jones, Lynn Lash, Foster Fade, Ed Stone, the Black Bat, the Blonde Adder, the Silver Corporal, the Cowled Nemesis, Black Mask detective Oscar Sail, and Click Rush, the Gadget Man.

But his lasting fame remains the Doc Savage adventures he penned as Kenneth Robeson. Pressed to write a Doc Savage novel every month, after a few years Lester was forced to hire ghost writers to help him keep up the hectic pace. But out of nearly 200 Savage exploits, Lester wrote or co-wrote the vast majority of them.

When Bantam Books began reprinting the series in paperback, the seminal superhero captured a new generation, this time selling millions of copies into the 1990s.

Over fifty years after his death, new Docs are still being published—as posthumous collaborations…. 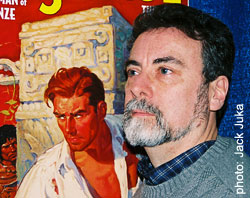 Will Murray discovered Doc Savage at the perfect age. He was 15 in January 1969 when he picked up the Bantam Books edition of Dust of Death and fell into the wonderful world of the Man of Bronze.

Four years later, impatient to read the unreprinted novels, he began collecting the original Doc Savage pulp magazine and started contributing to Doc Savage fanzines, beginning with The Doc Savage Reader. Asked to write for the first non-fiction anthology on the series, The Man Behind Doc Savage in 1974, Murray provided three survey articles that have since been reprinted in the prestigious Contemporary Authors.

As editor of Duende, Murray revealed for the first time the identities of all the ghostwriters who ever wrote as Kenneth Robeson. He also edited two collections of Lester Dent’s 1934 Doc savage radio scripts, for Odyssey Publications and Moonstone Books.

A correspondence with Lester Dent’s widow, Norma, led to a warm friendship. After Murray discovered the existence of an unsuspected Doc Savage manuscript and brokered a deal to get it into print, he was appointed the literary agent for the Lester Dent properties, a position he holds to this day. This was in 1979, the year Lester Dent’s lost masterpiece, The Red Spider, finally saw print after 30 years in obscurity.

In 1985, he adapted the 1934 Doc Savage epic, The Thousand-Headed Man, for National Public Radio’s Adventures of Doc Savage dramatic series. It was recently reissued buy radioarchives.com.

On his first visit to the LaPlata, Missouri home Lester Dent built in 1942, Will Murray discovered the existence of the unused 1934 Doc Savage outline, “Python Isle.” Inspired to turn it into the first new Doc adventure in 30 years, he completed it with Mrs. Dent’s permission. It was his first novel. Bantam Books read it, liked it, and put it on the shelf until they ran out of original Docs to reprint.

That day came in 1990, when Murray was asked to write the Afterword to the final Doc Savage Omnibus for Bantam, setting the stage for the new adventures of Doc Savage, which kicked off in the Fall on 1991.

By that time, Murray had gone on to a successful career as a pulp novelist, ghosting approximately 40 entries in the best-selling Destroyer action-adventures series, individually and in collaboration with series creators Warren Murphy and Richard Sapir.

For Bantam Books, Murray penned seven Docs—all based on Lester Dent manuscripts. While the stories were enthusiastically received by Doc fans, downsizing in the publishing industry brought the series to a premature conclusion, with several stories unfinished.

But Doc Savage fans never stopped asking Will Murray when he was going to write more. And he never gave up on the Man of Bronze.

Acquiring the license to revive Doc Savage from Condé Nast in 2010, Murray has partnered with Matt Moring and Altus Press to reactivate the legendary series—20 years after he started it.

Seven new Doc Savage exploits are planned. The Desert Demons will be followed by Horror in Gold and The Infernal Buddha. All will be based on Lester Dent material never before seen.

Murray continues to co-edit and contribute to Sanctum Books’ very successful Doc Savage and Shadow reprint series, as he has since 2006.

To celebrate the dramatic resurrection of the Man of Bronze, Altus Press has collected over 50 of Will Murray’s articles and essays on Doc Savage in one volume, Writings in Bronze.

In addition to Doc Savage, Joe DeVito has painted and sculpted many of Pop Culture’s most recognizable icons, including King Kong, Tarzan, and classic super heroes like Superman, Batman, Spider-man, and MAD Magazine’s Alfred E. Neuman (a super hero to some). He sculpted the award trophy for the highly influential art annual Spectrum and his poster painting has become their logo. Over the past thirty years he has illustrated, modeled or designed hundreds of book and magazine covers, posters, trading cards, collectibles, toys and just about everything else in a variety of genres.

Among his many present endeavors is the tentatively titled ‘Primordials’. This new project of truly epic proportions is well under way in both words and pictures.

5 thoughts on “About the Authors”

This site uses Akismet to reduce spam. Learn how your comment data is processed.